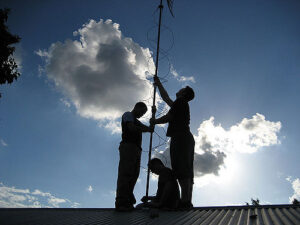 As of June 2017, about one quarter of the US population did not have access to broadband internet. This includes 16 million or 28% of rural residents, and 62 million or 23% of urban residents (1). Rates of connection vary widely by city; for example, 19% of NYC residents are unconnected compared with 40% of Detroit residents (2). In recognizing that internet access is vital to managing, navigating and participating in life in the 21st C, some communities and municipalities have taken up the challenge of providing access; one project maps over 800 initiatives (3). In reviewing just a handful of of these initiatives, I have found the variety of interpretations and understandings of, and ways of addressing access to the internet by grassroots community groups compelling.

The community and technical networks assembled by these grassroots groups are collectively referred to as “community wireless networks” (CWNs). Urban examples include NYC Mesh, Equitable Internet Initiative (Detroit), and PeoplesOpen.net (Oakland); there are also many rural-based collectives (see reference #3 for more information) as well as international examples (ex. Guifi.net in Spain).

This two part blog post series explores the efforts of 3 urban-based CWNs – those named above – highlighting the nuances of their understandings of access, which include but go beyond mere physical infrastructure and service provision. This inquiry reveals much about the challenges and possibilities embedded in these missed connections, and also has lessons for our own work.

In thinking about “access”, infrastructure is a necessary baseline hurdle that CWNs must overcome. Some rural areas of the United States lack physical infrastructure all together, in part because it is not seen as a worthwhile investment by the companies that provide Internet access to the majority of US residents. Similar cost-benefit analyses have left dark fibers (areas where physical infrastructure exists, but service is not routed) or no infrastructure in urban neighborhoods as well. Infrastructure-related exclusions in Detroit and Cleveland have been referred to as “digital redlining” because access to broadband correlates with and compounds existing geographically-based racial and class inequalities. On behalf of these community members, one civil rights attorney filed complaints against the FCC in 2016 (4). More specifically, the “[civil rights attorney] and community members maintain that AT&T is withholding high-speed Internet from minority neighborhoods that have higher poverty rates” (5).

In addressing the lack of infrastructure, CWNs use mesh network technology. These communication systems involve a decentralized, “peer-to-peer” network of wireless routers that attach to members’ roofs and can send and share a signal between them. When this network is plugged into the internet backbone and routed through an internet exchange point, the entire network can access the internet as we might generally think of it (6). Mesh network technology also creates an intranet that can be used to communicate across the network even if they were to be cut off from internet access. This feature has been handy during natural disaster emergencies like in Red Hook, Brooklyn during Superstorm Sandy, and is framed as a resiliency-related feature by CWNs more generally (7).