No, Our Homes Aren’t a Plaything for Speculators 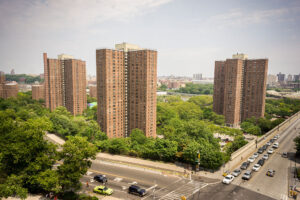 Disproportionately impacting the low-income and poorly housed, COVID-19 was, in the words of one London politician, “a housing disease.” Historically, working-class people fought for and won public housing as a way of getting homes that wouldn’t cost their lives. Today, we need to improve on that past achievement — but in the United States as in Britain, that will also mean confronting some common foes.British and American housing policy have been shadowing each other for decades. Both have aggressively pursued private home ownership as an economic and ideological weapon, leaving a trail of destruction in working-class communities, particularly communities of color.

The global real estate and finance industries and their political lackeys have systematically denigrated publicly owned housing. After all, it has always been a barrier to speculators’ power. More than that, affordable rents, secure tenancies, and homes safe from market-driven property deals are essential if the people who build and run our cities are also to live in them.

Forty years ago, this seemed much more possible than today. Back then, some 30 percent of UK households lived in council housing (the rough equivalent of US public housing). Council tenants had a degree of security and control over their homes that today’s hyper-exploited, precarious private renters can only dream of. When, in 1980, Margaret Thatcher introduced the Right to Buy, giving council tenants a legal entitlement to purchase their homes, it started a wave of sell-offs, continued under both Tory and Labour governments, that reduced council housing to 6 percent of the country’s homes.

In the UK’s big cities, like some in the US, public housing retains a significant place. More is now being built, but nowhere near enough to meet demand. Yet still politicians of all stripes fail to see the true value of high-quality, energy-efficient, nonmarket rented homes — and use a shared playbook to undermine it.

The fight for the future of US public housing is today reaching a crescendo in New York City, where at least 339,900 people (and probably more) are housed by the New York City Housing Authority (NYCHA). NYCHA developments are on publicly owned land that would be massively lucrative to property speculators. But NYCHA has been starved of government investment for years and, like its UK counterparts, is using this as justification for privatization. Today, tenants are mobilizing against this trend — insisting they don’t want their homes to be mere investors’ playthings.

Continue Reading: No, Our Homes Aren’t a Plaything for Speculators