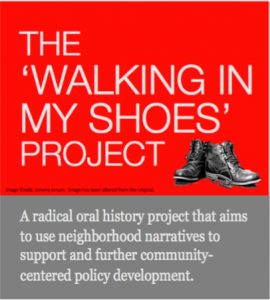 The Walking in My Shoes (WIMS) Project is an open digital pedagogy project that began as a way to: 1) more deeply involve the students in my class with the issues we were discussing, 2) publicize the the conversations that took/take place in my public university setting, 3) to stretch and experiment with my pedagogy. In sum, I created specific assignments over the course of 3 semesters that aimed to achieve these goals.

Over its two year life-span, the project has grown and shifted form based on the community groups and students we worked with, and the way the relations took place.

This site aims to 1) document this history of this project,  2) act as an open educational resource (OER) to which others may turn in  learning more about topics of urban inequality, particularly as it manifests in NYC City and 3) be in conversation with other teachers aiming to achieve similar means in their classrooms. For a look at the history of the project, continue scrolling down – the various posts tell the tale of the twists and turns and roadblocks the project has endured over time in reverse chronological order. For the OER, and more information on urban inequality, click on the red menu icon in the upper right-hand corner (hexagon with 3 bars).

This project is forever incomplete and able to grow, and I hope to continue growing this project in the future.

Table of Contents (in chronological order):