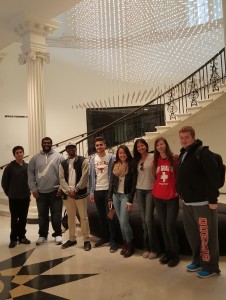 In the Fall of 2015 I was awarded an Experiential Learning Activities Course Enhancement Grant by the the Urban Studies Department at Queens College where I have served as an Adjunct faculty member since the Spring of 2013.  These grants were made available thanks to the generous support of the Hagedorn Fund, and intended to support “course-specific activities that foster an experiential learning environment”.

With the funds I received from this grant I opted to take my students to the City Museum of New York for a guided tour of the Activist New York exhibit and an evening talk on a contemporary activist movement in New York City, the Living Wage movement.  These melded nicely with the course I teach entitled Urban Studies 101: Poverty and Affluence.  This course discusses the economic inequalities that define our city/nation/world today, and the role of urban development in that reality.  More specifically we focus on the last 40-80 years, covering suburbanization, urban disinvestment, the fiscal crisis and the recent wave of globalization, and try to understand more recent phenomena like gentrification , criminal injustice, and trends in privatization and militarization of public space in this historical context.  In unraveling this history we focus on policy decisions and the role of powerful social actors like the government, real estate and business and corporate interests.  What is largely left out of the conversation is the role of the people in shaping the city, and the on-going battle many residents of New York City, and cities around the world, wage every day and every decade.  The field trip was meant to highlight this other, too-often-overlooked side of history.  In theory, I think highlighting this history restores some of the power, hope and human agency that is sucked out of students through our class material, which in turn changes the way we as a class read and discuss the material (‘knowing’ as empowering rather than depressing).

Overall, the students gave rave reviews about the trip, and expressed eager interest in attending more talks together around the city during the remaining months of the semester.