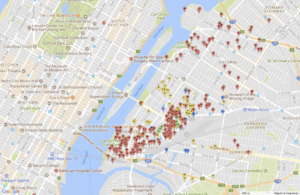 Between 2000 and 2015, Long Island City experienced a 56% increase in housing units. This is faster than the average rate of growth across the city (7%) and the average for Queens County (3.3%).

According to a recent study RENTCafé found that since 2010, Long Island City has seen the most new apartments built among neighborhoods across the country. Their takeaway?: “More than a decade ago, Long Island City was tagged to become a hot nabe. It had the 3 things that any neighborhood deemed for greatness needs: location, location, and location. In a matter of just a few years, the neighborhood has gone from dated industrial vibe to gleaming new glass towers, to take the number 1 spot for building by far more apartments than any other neighborhood in the country has done in recent (post-recession) history. A massive total of 12,533 new apartments in 41 buildings were built between 2010 and 2016 in this Queens neighborhood.”

This report investigates these changes.