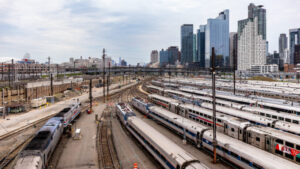 Image Credit: Adi Talwar
Caption: A 2017 Sunnyside Yards feasibility study proposed scenarios that included up to 24,000 units of housing—including up to 7,200 affordable units—in residential buildings as high as 69 stories, surrounded by as much as 52 acres of open space.

Over the last year, the quasi-private, city-affiliated NYC Economic Development Corporation (EDC) has been peddling yet another megaproject for southwestern Queens. This time the proposal focuses on decking and developing over Sunnyside Yards. Through a series of public meetings the agency asked residents to imagine and think big about how this new development could meet community members’ needs and solve the ongoing and exacerbating challenges they and their neighbors face.

But as organizers and activists have asserted from the beginning – most recently with a public statement signed by 43 grassroots groups across the city and a press conference on November 25th – development over Sunnyside Yards cannot address the challenges Queens’ communities are facing. Further still, development of Sunnyside Yards is emblematic of a broader and fraught city-building process, which is churning communities across the city and displacing working-class communities while building new neighborhoods for wealthier, whiter households. To boot, we also know that the real winners of this remaking of our city are already-wealthy real estate developers and private equity firms.

More to this point, grassroots opposition is rooted in a holistic understanding of past and present development across our neighborhoods. This broader scope renders Sunnyside Yards and the underlying development agenda as one that reifies and exacerbates existing inequalities and promises the continuation of past state-led harm. Through this expanded scope, the only responsible decision to development over Sunnyside Yards is “NO!”.